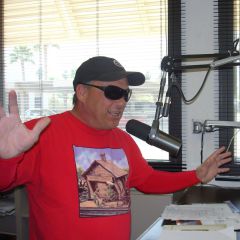 Matt McKay, host of The Elevated Tee, has been a resident of Palm Springs since 2008, but his connections to the game of golf stretch back to the mid-1980′s as a sports and travel writer in Dallas, Texas. While he’s contributed to many publications in his career, his primary duties revolved around serving as the area golf columnist for The Dallas Morning News from 1993-2004. In a six-year period, McKay was honored four times for his media contribution by the Northern Texas PGA.

His travel writing career brought him to the Coachella Valley several times over a 25-year period, and in 2008, he and wife Shelly decided to make Palm Springs their new hometown, and THE ELEVATED TEE was born. In the summer of 2013, Matt and Shelly discovered Idyllwild and fled the desert summers in favor of potential snow! Their youngest daughter, Madison (18) subsequently graduated from Idyllwild Arts Academy, and will attend the University of Oregon this fall. Matt and Shelly have been married for 27 years and their eldest children are already deep into college; Marley (19) is a sophomore at Azusa Pacific, while A.J. (22) is a senior at BIOLA. Hodad, the Mini-Dachshund, (6), and Owsley (1), the Australian Cattle Dog mix and Coachella Valley Animal Campus alumnus, are the family pets.

The first thing listeners should take away from each episode of The Elevated Tee is…we care! We care about the game, the people who play it, the people who administer to it, and those who support it financially. We are aware of the challenges facing golf, and the opportunities it offers its participants. Each week’s show will feature a guest who can offer a national perspective on the game, and a guest who will provide listeners with regional expertise. It’s the fastest and most stylish way to get caught up on the entire week of golf in two hours.

We look forward to seeing you Sunday!

Judd Spicer is an award-winning, veteran freelance writer and Associate Member of the Golf Writers Association of America. After 12 years of covering MLB, NBA, NCAA and the active golf landscape of the Twin Cities, he relocated to the Palm Spring, Calif. region in 2011 to further pursue his golf work and Champions Tour dream. Sporting measured distance off the tee, Spicer refers to his pitching wedge as his "magic wand.